Everybody, at least in Italy, when asked about Greece, replies that the first things that comes up to mind are the sea and the islands. This time I am going to talk about mainland Greece, which we discovered, surprisingly, to be at least as cool and interesting as the islands.

As for every good adventure in my life I was accompanied by incredible travel mates, just like Don Chisciotte and Sancio Panza. This case is no exception, as I left from the port of Bari with my colleague and friend Matteo. We carry research on Supergravity (some weird extension of General Relativity) at the University of Padua, and our destination was the XXIX conference on Supersymmetry and Unification of Fundamental Interactions in Ioannina. The cold and windy night we spent on the last deck of the boat that carried us from Bari to Igoumenitsa did not prepare us for the luxurious hotel the conference organizing committee chose for us in Ioannina. The arrival was expected at 5:30 in Igoumenitsa, but we did not know that Greece was in a different time zone than Italy, so we slept no more than 4 hours (this is something you should take into consideration when planning a trip to Greece). Arriving so early, we decided to take the panoramic road to Ioannina. Apart from some unexpected pebble streets, I did not regret driving on those paths, staring at the sun while it comes up the shoulders of the hills, so typical of the Greek inland landscape.

Arrived in Ioannina, we took the chance to explore around the city. The town lies on the shores of Lake Pamvotida, where people can run, enjoy the views of the other banks or live the night-life in the various restaurants, bars and pubs located in that zone. Indeed, at night the view is even better, with all the lights coming from the island at the centre of the lake, where some monasteries lie, and from the houses on other banks, looking as candles floating all over the dark water of the lake. The night life in Ioannina is not only restricted to the shores of the lake, there are also many suggestive streets and alleys near the old town, filled with restaurants and bars, where losing ourselves was a pleasure both for the eyes and for our mouths. The food in Greece is renowned all over the world (Gordon Ramsey also admitted that he prefers Greek food over Italian cuisine, BTW he likes to be controversial, so I would take his statement with a grain of salt). In mainland Greece one can usually find a lot of different types of meat: pork, chicken, lamb, etc., but cheese lovers like me should try saganaki cheese (it’s just fried cheese, but it is scrouptious) and then obviously the choriátiki saláta (the Greek Salad) with feta. We also had the chance to eat a typical dish from the island at the center of the lake, which is frog’s legs (fried), I did not like them and I can state that they reminded me the taste of chicken, but you should go for it at least once if you have the chance to pass by Ioannina. 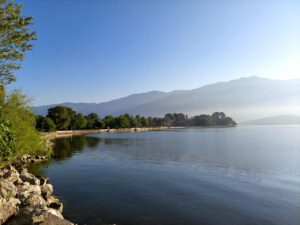 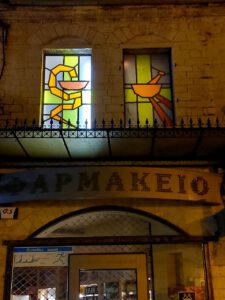 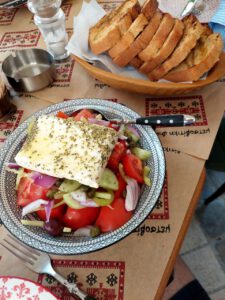 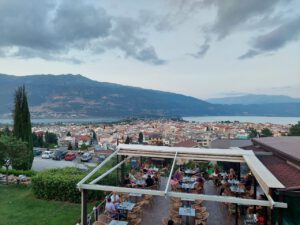 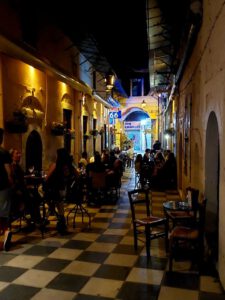 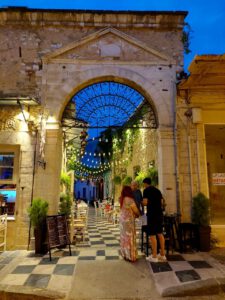 We couldn’t explore more around in the neighbourhoods of Ioannina, due to the conference, but we had great times learning about various aspects of this marvellous symmetry that should describe our Universe in one of its phases called Supersymmetry. What better place to discuss about Physics than Greece? The land which gave birth to Mathematics, Physics and Metaphysics… We had the chance to meet new people, and a lot of new friends (PhDs from other nations), among them also some native people who pointed us to the right places to eat and buy some food to bring home with us, what best souvenir than some Greek cheese? Sharing lunches and dinners with our new friends has been one of the greatest pleasures of the time spent there. Getting to know new cultures and traditions from people coming from Chile, Germany, Perú, Poland, Brazil, Japan or Taiwan all together in front of some souvlaki (skewers of meat) on the shores of the lake is the kind of emotion I would always look for. Remember to conclude dinners with Tsipouro, a typical Greek liquor, and if you are with Japanese people do not say “Cin Cin” when you toast, as Italians usually do, as it means penis in Japanese. Even though most days we were busy learning about Supersymmetry, we managed to visit Meteore, which literaly means “in the middle of the air”, and are suggestive monasteries built on top of rock formations in the 13th and 14th century. One can only reach them by walking uphill along the mountains and the views one gets once there is exceptional and enveloped in the mystical atmosphere only belonging to sacred locations. We have also been able to visit the village of Vikos Gorge in the North of Ioannina with its monastery’s ruins and the typical round arches bridges. 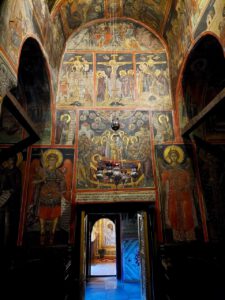 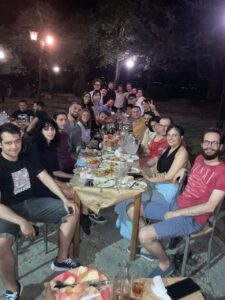 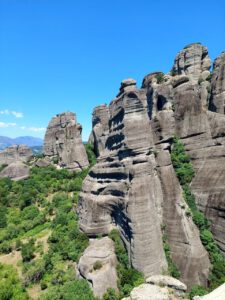 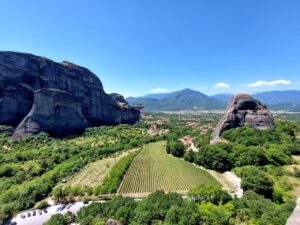 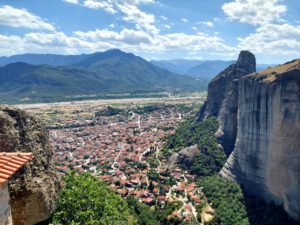 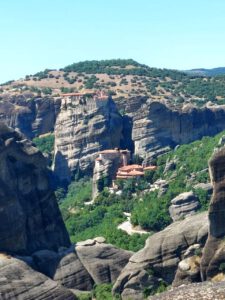 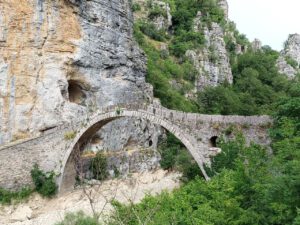 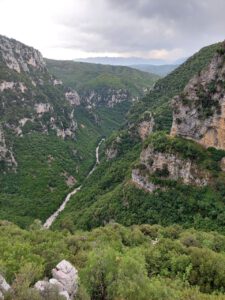 After so many beautiful experiences we had to leave Ioannina and – sadly – our new friends, but we had time for one more small adventure. We got into the car with a Greek friend of ours, who we met in Padua some months before, and we had a small road trip to Athens. The panorama along the road is astonishing, and incredibly various, one passes next to mountains and hills and then finds the sea and then again cliffs. During the trip, discussions about life, relationships and physics made the time fly by, everything surrounded by “Rembetiko” music, a typical Greek music genre that goes back to the 1920s (suggested artists: Markos Vamvakaris and Vasilis Tsitsanis). Arrived in Athens in our room with a marvelous view on the Acropolis we visited Syntagma Square where we could attend the change of guards in front of the Parliament and then we moved to grab some beers in “Exarchia” and “Metaxourgio”, two unconventional districts of Athens, where among bars and pubs one can easily finds buildings belonging to anarchists and banners and posters exalting freedom and peace. It is nice to see how these areas of the city form a peaceful continuum with the main centre and different residential zones. We also had the chance to pass by the National Academy before going back to sleep. Once in Athens, it is inevitable to visit the Acropolis and its museum (even though British stole the most beautiful pieces of art from Greece). Even though there is plenty of pictures of it on the web, one is never really ready for the magnificiency and impressiveness of the Parthenon. At the Acropolis, one can really feel the weight of history. Walking in the same places where Themistocles, Pericles, Plato, Aristofanes, Sophocles, Eschilo, Euripides, and other eminent personalities of the past used to walk, discuss, present their comedies and tragedies made me feel insignificant yet also proud to be part of this species which achieved so much during the centuries. 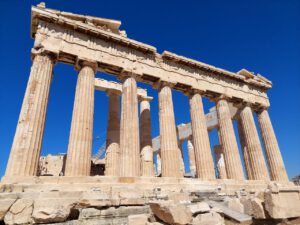 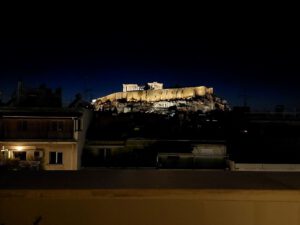 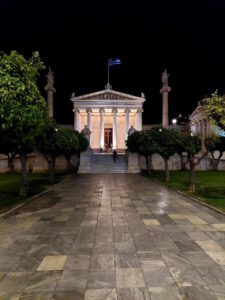 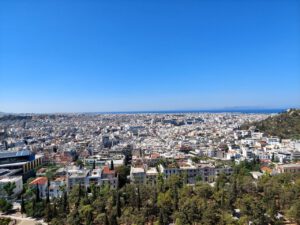 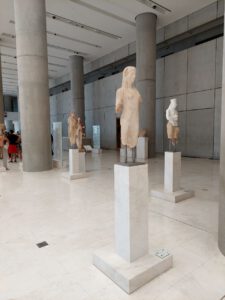 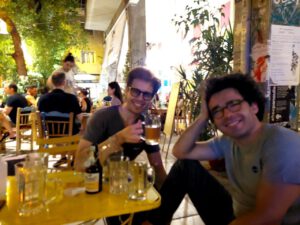 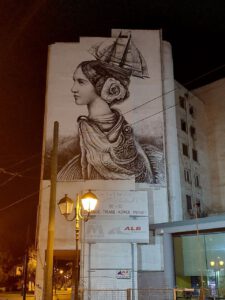 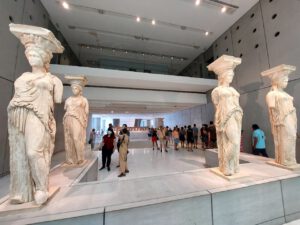 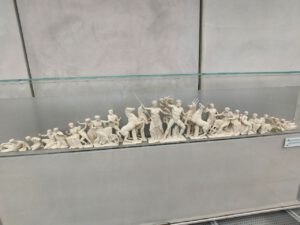 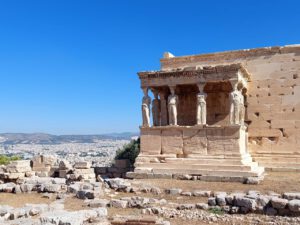 With this last experience, the conference and the trip were really ending. Greece gave us a lot in term of knowledge (as usual), fun, hospitality and friendships and I hope to be back soon. Let me conclude with a quote from Heraclitus, which was also the motto of the SUSY2022 conference and gave us a fruitful source of reflection (I hope can be the same for you): “The one follows from everything and everything from the one”.