The plane took off, the beginning of a new journey, it is always exciting when you embark on a new adventure. The team is small, just me and a long-time friend. We reached Lisbon early in the morning and after leaving the backpacks in the hostel we began our visit of the city. Compared to other European capitals, Lisbon is not so extended, the population is about half a million and it lays on an area of 100 square-km of extension. Nonetheless, there is plenty of things to do, buildings to see, alleys to discover and bars, small restaurants, and clubs to try.

Our hostel was in Rossio, one of the central quarters of the city, we started our tour by walking down Rua Augusta, a cobblestone street where you can lose yoursevels among the shops and restaurants while heading directly to the marvellous “Arco da Rua Augusta”. Crossing the latter, you will be looking at one of the most amazing squares in Europe: Praça do Comércio. This is a magnificent place, on one side there is the Arc and the beginning of Rua Augusta while the opposite side faces the river Tagus, the other two sides filled with bars and restaurants. In one corner, you can get a glimpse of the castle of St. Jorge.

The castle was our next destination, we headed up the hill; to be honest, this building did not generate in me the feelings a fortress should evoke. After walking around its walls, we stopped in two of the various “Miradouro” the town has to offer. Those are panoramic viewpoints where one can observe the red shingle covered roofs of the houses, which like a mosaic compose the urban texture of the city, the Tagus and the city of Almada on the other side of the river. Two of these amazing viewpoints are the Miradouro de Santa Luzia (this is especially beautiful thanks to the presence of Azuleyos on the walls surrounding it) and Miradouro das Portas do Sol. After a brief passage from the gothic cathedral we walked to a very special place. 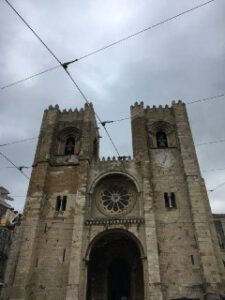 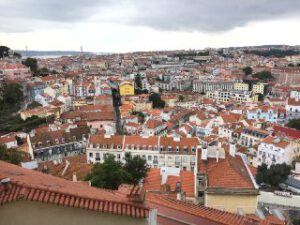 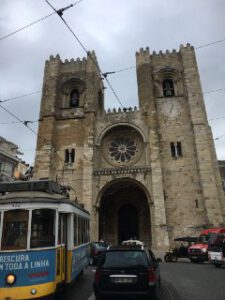 Outside the traditional tourist’s circuits, there is this tidbit called LXFactory. In the remaining of what used to be an ensemble of industrial warehouses and hangars, numerous local artists and art collectives, shops and restaurateurs give new life and a hipster vibe to this fascinating place. If you pass by Lisbon, I strongly recommend to take some time to visit this astonishing example of art and craftsmanship. Once there you absolutely CAN NOT miss the “Livraria Ler Devagar”. This old book shop, besides the tall shelves where books and vinylis are exposed near an old original machine to print newspapers, was the set for an unexpected yet extremely fascinating encounter with Pietro Proserpio. 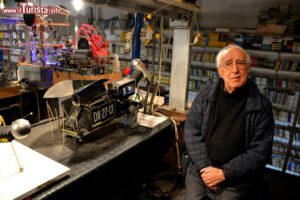 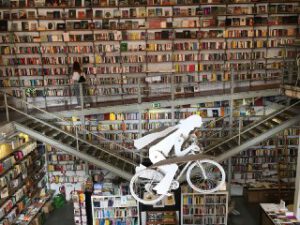 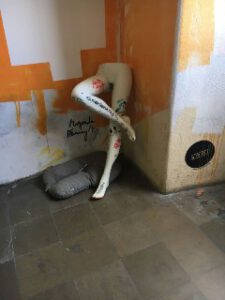 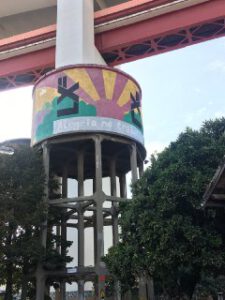 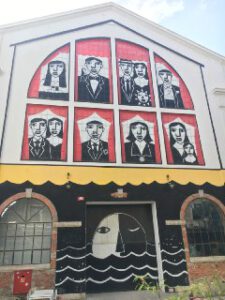 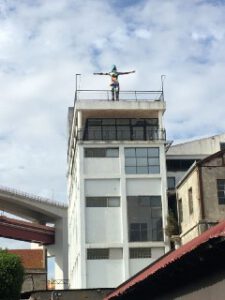 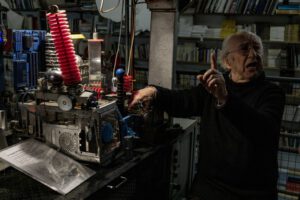 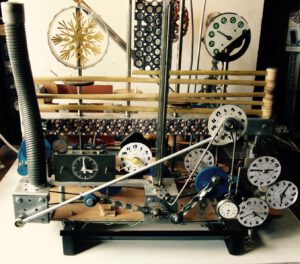 This old guy, that many consider being the guardian of the library, is an Italian inventor and craftsman who lives in Lisbon. Once in the Livraria Ler Devagar, he will lead you to the second floor of the shop and, just as a tour guide, show you around the various inventions and creation he builds: electrical and mechanical piece of arts, interactive compositions built from scraps that he will explain to you, from the inspiration behind each single creation to the story that this works want to tell. Once there, you enter a new dimension, forgettingwhat’s happening outside, your problems and diving in the ocean of imagination and creativity where Pietro  with his tireless smile will conduct you.

After this fascinating experience, we moved to the symbol of Lisbon, the Tower of Belem, where sailors raised anchor to discover new lands and live new adventures. Not too far from the tower we stopped by the “Padrao dos Descobrimentos”, a monument to the explorers, who left from Portugal to reach the Americas. Following their footprints, we started this trip with the best auspices.

On our way back to the center, we couldn’t help but entering in the “Pasteis de Belem”, probably the most famous pastry shop in the city. In the end, I don’t regret it and I strongly recommend to taste one of their pasteis, a typical Portuguese dessert based on puff pastry and eggs. 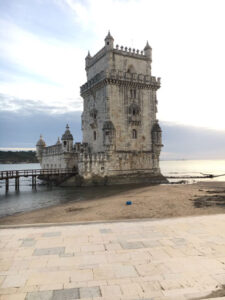 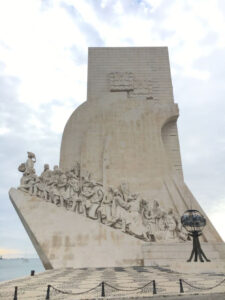 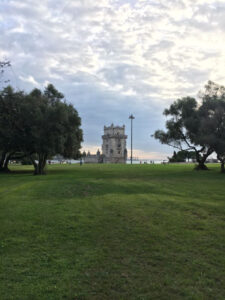 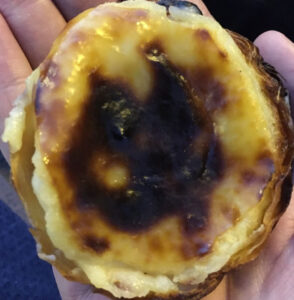 Our visit of Lisbon ended with a dinner in one of the numerous restaurants which occupy the streets of the “Barrio Alto”, where we tried their specialities based on bachalau (codfish),  and a drink at the “Pavilhao Chines”, a fancy bar completely filled with knick knacks. Each room is styled following a theme and this, together with the music, makes the atmosphere perfect for chatting with friends in front of a glass of beer; we of course choose the trains room (I love trains).

On our second day, we left Lisbon heading towards Coimbra, but before getting there, we conceded ourselves a stop in Sintra. In this village, the kings and noble families from all over Portugal used to go for their buen retiro. This colourful city hides so many surprises. The “Palacio National da Pena” and “Quinta da Regailera” are a total must-see. Due to time-constraints we had the possibility to visit only the latter. The spectacular garden of this palace contains fountains, benches, wells, grottos, lakes and towers, in a labyrinth of paths and ways through a luxuriant vegetation. 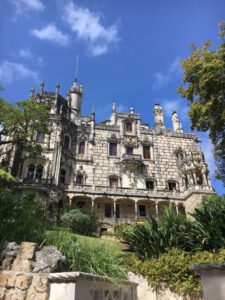 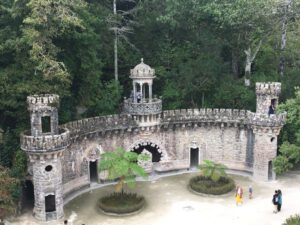 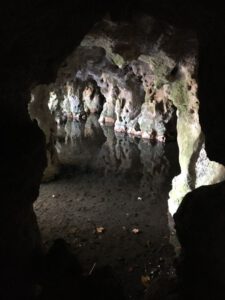 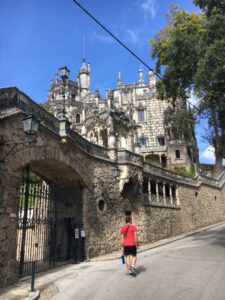 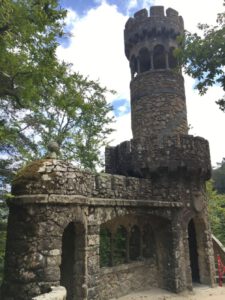 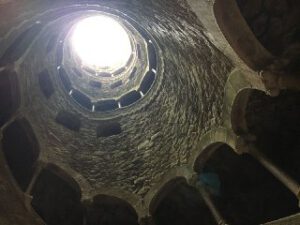 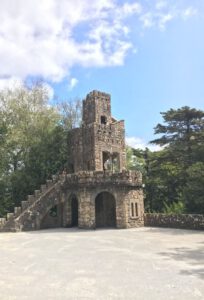 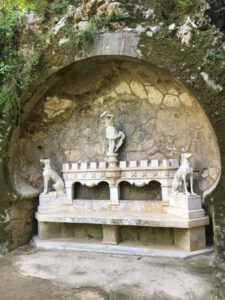 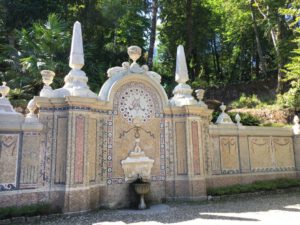 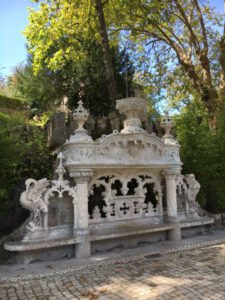 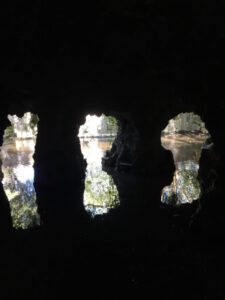 It takes a couple of hours to visit it completely, but it is totally worth the time. You will be left speechless by the sight of its gothic façade already from the street, way before entering the palace, with its gargoyles, pinnacles, capitals, the octagonal tower and its unique style. There’s no need to mention the interiors, worthy of a king. This is a must see of any visit to Lisbon and Sintra. 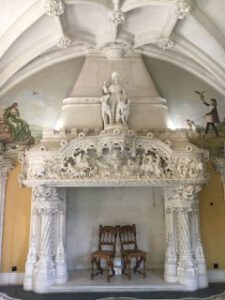 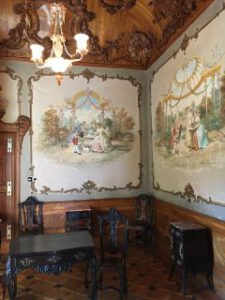 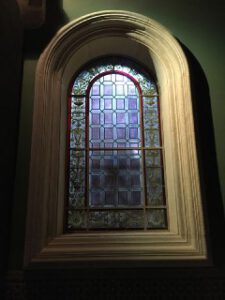 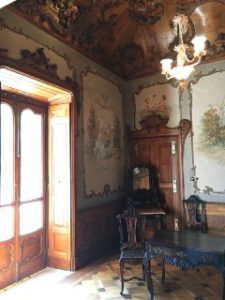